Joan Thompson Boghossian, a graduate of the University of Rhode Island,began her arts studies when her fourth child left for college. She continued to study with prominent artists locally and nationally, and now is recognized as a major talent in New England. She has won more than sixty significant prizes, including awards in national and regional juried shows. She is a four-time winner of the Grumbacher Gold Medallion Award in watercolor. Her awards cover watercolors, oils, etchings and monotypes. Boghossian is an elected artist member of numerous art associations, including the New England Watercolor Society, the Providence Art Club, the Copley Society of Boston,the Catharine Lorillard Wolfe Art Club, and the Mystic Art Association. Her paintings have been shown in museums, art associations, and galleries, primarily in New England but also throughout the United States and overseas. They are also included in private and business collections. A native of Newport, Rhode Island, Boghossian lives in Pawtucket and maintains a studio in Narragansett and Providence. 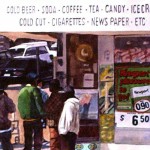